Jules Dervaes was an extraordinary person. He was the head of a family in Pasadena who grows almost all their own food. They have turned their normal size backyard into one of the most fertile and productive tiny farms in all of southern California.  More than 400 different vegetables, herbs and fruits grow in every nook and cranny, along with goats, chickens, bees and ducks.

Jules was the creator of this “Urban Homestead.”  When I interviewed him for this story he generous with his time, genuine in manner and deeply concerned about what we eat and how we care for the planet.  He did more in one lifetime to nurture the environment than most of us could do in multiple lifetimes.

The thousands of people who have visited the Dervaes’ farm or purchased produce from their porch can see Jules’ love in the picturesque garden that surrounds their Pasadena bungalow.  His legacy is in the small plot of earth he nurtured and in the big ideas he spread to people around the world.

Jules Dervaes died in December 2016 at age 69. His three children continue to tend the homestead and carry out the cause.

Thank you, Jules, for all you’ve taught us.

Growing one’s own food in urban areas can seem like a far-fetched idea. But not for one Pasadena family. The Dervaes family has been growing their own food for more than a decade. They’ve been at the forefront of urban homesteading by growing thousands of pounds of food annually in an average-size backyard.

“I brought the country to the city rather than having to go out to the country,” said Jules Dervaes, the man behind the self-sufficient farm he created with his three adult children.

The Dervaes’ urban homestead is sustainable and dense. They grow and raise 400 varieties of vegetables, fruits, and edible flowers that amount to about 6,000 pounds of food a year, enough to feed the family with surplus left over to sell. Fresh eggs from chickens round out their diet. The family-owned city farm is the talk of the town for many local chefs looking to cook up a tasty meal. The family makes roughly $20,000 just from selling their freshly grown produce. They use the money to buy staples that they can’t grow like wheat, rice, and oats.

Reporter Val Zavala visits the Dervaes’ homestead to find out what inspired Jules Dervaes to go green in the extreme.

The organic movement has been seen as a fad and a trend by many, but others call it a necessity in a changing world where toxic chemicals are increasingly killing life from the bottom of the food chain up, including people as the story of terminally ill groundskeeper Dewayne Johnson demonstrated.

Organic agriculture is still a ways off from becoming truly mainstream in the United States, especially with companies like Bayer (now the owner of Monsanto) renewing their push for more pesticides and new technology-intensive methods of farming.

But even as the U.S. continues to approve new “longer-lasting” GMOs, harsh, toxic pesticides and other unnatural “innovations,” other parts of the world are anteing up on organic farming like never before.

While these changes have been far from simple, places like the Himalayan state of Sikkim in India are making immense progress, helping to support the health of pollinators, human beings, and the environment in the process.

In January 2016, the state of Sikkim, in the shadow of the world’s third-tallest peak Mt. Kanchenjunga, succeeded in becoming the first fully organic state in India, and probably the world. A few short years later, there are still plenty of kinks to be worked out, but the benefits are being seen first hand.

Bee populations are said to be rebounding, with plants dependent on bee pollination like cardamom providing much higher yields. Cardamom for example has risen by more than 30% since 2014, a reportfrom The Washington Post said.

Tourism to the region has also increased nearly 70% since the state went organic according to the BBC (see video below), and soil health has rebounded tremendously, as is usually the case when organic methods are applied. Marketed as an eco-friendly dream destination, the region boasts 500 species of butterflies, 4,500 types of flowering plants, and rare wildlife like the red panda, Himalayan bear, snow leopards and yaks.

The state also received a Future Policy Award 2018 at a UN ceremony in Rome, beating out 51 other nominees from 25 countries worldwide for best promoting agro-ecology.

While many farmers have struggled in the years following Sikkim’s mandated switch to organic, they have also said that their crop yields have rebounded to what they were before the change. In response to the increasing signs of success, Indian Prime Minister Narenda Modi has recognized the state for its contributions and pledged further support for organic farmers throughout India.

Thus far, there have also been concerns about ineffectiveness of the bio-pesticides being used in place of synthetic ones, as well as rising prices and diseases affecting crops.

The state has also had to rely on conventional crops from West Bengal to help feed its population while farmers continue to learn how best to maximize yields with assistance from government programs.

But positive signs abound, as shown in the BBC report below.

Share
RIO DE JANEIRO, Brazil - Family farming, usually organized as smallholdings, accounts for 84% of all Brazilian rural properties, but occupies only 24% of the area devoted to agriculture in our country. It corresponds to 40% of the gross value of production, as well as 77% of the jobs in agriculture. In addition, it is responsible for more than 50% of the products of the Brazilian worker’s basic basket.
However, in addition to the already evident inequality in the concentration of land (the average family size in Brazil is 18.37 hectares, while the latifundium/large land estate is 309.18 hectares), the reality is that the Brazilian family farmer , the main responsible for feeding the Brazilian people, receives only 13% of the resources allocated by the government to the agricultural sector.
The other 87 per cent go to large latifundia, less productive than family farms, which employ fewer people compared to family farms, which are mostly used to produce primary goods for export (as opposed to family farms) that cause more damage to the environment in relation to family properties, and above all, which are owned largely by foreigners or by Brazilian politicians.
http://www.fort-russ.com/2017/12/family-farming-is-civilization.html 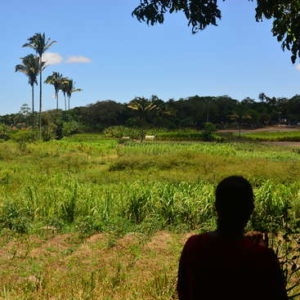 To make the economies of the land and of land use something like sustainable, we would have to begin with attention to the difference between the industrial economy of inert materials and monetary abstractions and an authentic land economy that must include the kindly husbanding of living creatures. This is the critical issue.